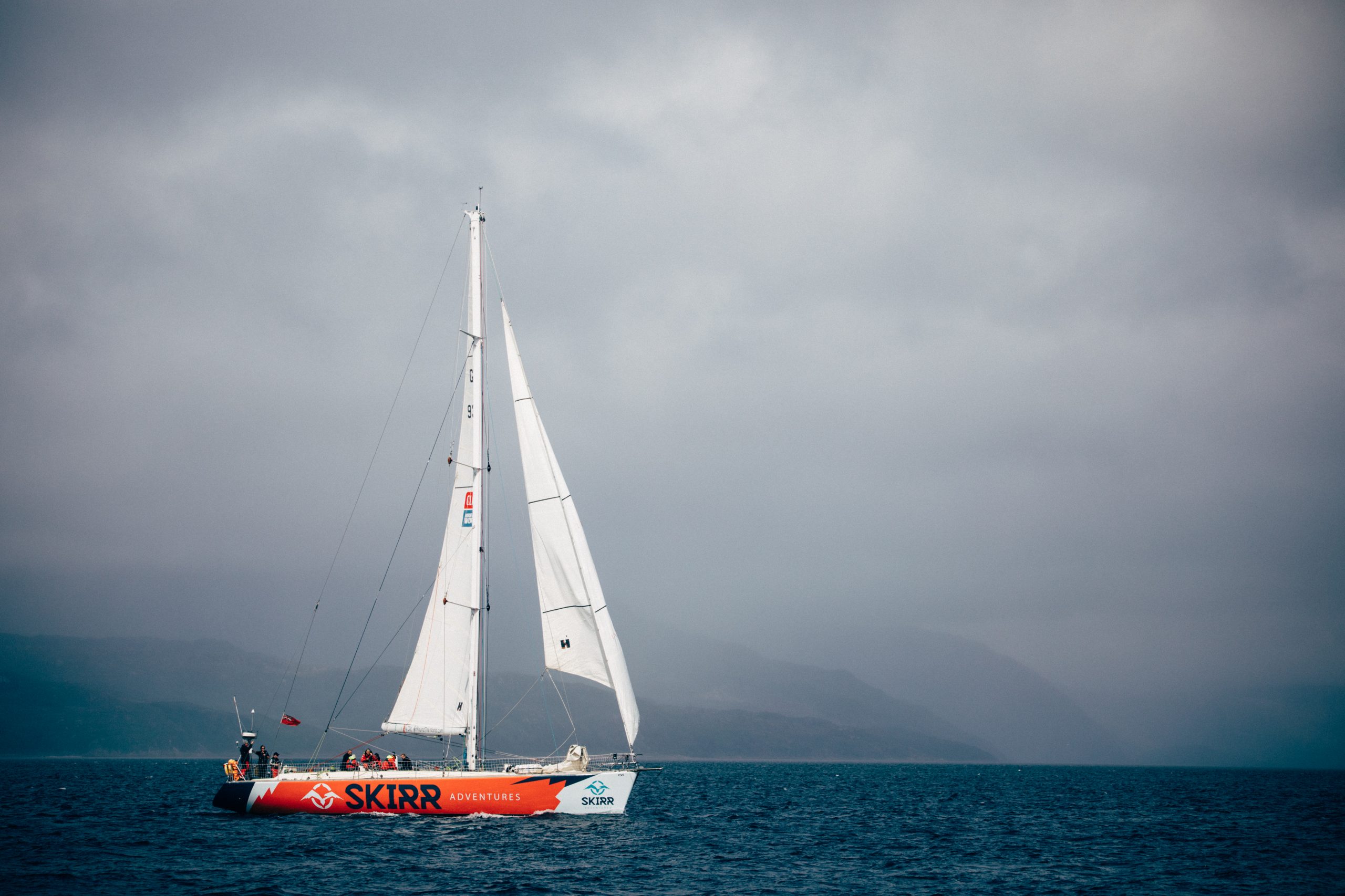 Graham Hill writes from onboard one of two SKIRR Expedition yachts

Monday saw us leave the North Quay at Oban with CV11 in good shape after a though deep clean and also the completion of numerous maintenance tasks which also involved two of the maintenance team who had flown up from Gosport with large boxes of bits to assist in the process.

Graham D left to join his wife for some Scottish island touring, and Mate Dex was replaced by Land Guide Jason, for the next 3 legs. Ewan, the expedition photographer, moved over to CV6 to capture images of life on board with Bob Beggs and his crew, and will hopefully get some good exterior pictures of CV11 as we sail in company.

Skipper gave us an outline plan which requires us to factor in a deep low pressure which will have an impact on out track and may mean we delay departure to let it pass through. So, Monday saw us cast off and make our way down the channel between the mainland and the Island of Kerrera, a great start to the day with good weather. To preparations us all and get us back into shape we carried out reefing evolutions and the mandatory MOB drill. With lunch on the go the day left us making our way up the Lynn of Morvern and tucking into an anchorage by Shuna Island. Amazing to see many jelly fish around the anchorage so not very inviting for swimming, which mate Tom was contemplating!

Not too early start with a plan to meet CV6 later in the day. Decision to depart either Tuesday evening or early Wednesday morning to miss the worst of the low.  Wind against us all the way back down the channel until we turned into the Sound of Mull, then a pleasant sail up to the rendezvous point just off Tobermory where CV6 were waiting. Many sailing boats out taking advantage of the nice day. The scenery is certainly spectacular with ancient buildings lining the shore all around us. So, at 1700, with passage plan filed, we departed on Leg 2 to Iceland in company with CV6. An expected trip of 610nm. Great to see the two boats, in SKIRR livery, finally setting off. The routing taking us out of the Hebrides around the South tip of Barra Island and then on a direct track to our next destination. With calculations done this will allow us to miss the worst of the depression, and with a bit of luck, on a single tack.

Now back in the watch system we just need to sail an accurate windward course and count the miles down.

Took a little time to settle into the watch system with some ‘mal de mer’ taking its toll. Not helped by the beating into a rough sea to get around Barra. The two watches now consist of PORT Graham, Greg & Felicity and STBD Nigel, Michael & Benedicte. Jason and Tom taking mates watches.

The wind has remained predominantly Force 5/6 so the sail plan has been Yankee 3, Staysail and Main with reefs taken and shaken out to meet the conditions. Quite a few lines of squalls have been encountered but most of these can easily be seen, and prepared for, as the visibility has remained good.

Plenty of birds visit and join us for some fleeting fly pasts and a pair of puffins flew by very close to the waves and looking like they were working very hard.

More dolphins have come to play. Bigger than those that we encountered in the Irish sea and always a pleasure to watch.

We have only encountered two large vessels on the passage so far with the large tanker, Sea Dragon, changing course to allow us to maintain our track.

With the wind now looking to drop in strength and swinging to the south it looks good sailing up to Iceland. Wednesday also saw us pass Latitude 60 North. For those interested we are passing through the shipping forecast areas of HEBRIDES & BAILY.

There is a decision to be made though. With another low pressure due to pass over Iceland a choice has to be made. This has been put to the vote with the options:
– Continue straight to Reykjavik eta Saturday evening or
– Stop at the Vestmannaeyjar Islands then continue to Reykjavik
(Down side to this is that the stop will mean the potential 24-hour passage to Reykjavik will be beating as the new low pressure will have taken hold).

Track us as we continue our expedition voyage.